Gracemount Primary School is a non-denominational school serving pupils aged between 3-12 in the south side of Edinburgh. Our current catchment area includes the areas of Alnwickhill, Howdenhall, Mortonhall, Gracemount, Balmwell, Burdiehouse and Burnhead.

It was built in 1959 and the first Headmaster was Mr James Forsyth.  In its 60 year history the school has only had 5 different Head Teachers. However, with the fantastic community, ethos and culture at Gracemount Primary School it is no surprise that they didn’t want to leave!

Our current Head Teacher is Mr Greg Dimeck, who is supported by a brilliant staff of Teachers, PSOs, PSAs, EYPs, Admin staff, FM staff and volunteers. Each of whom do their absolute best to support the pupils and families we have at Gracemount in a variety of different ways. We truly believe that Gracemount Primary School’s place is at the heart of the community and therefore we have an open door policy.

We are blessed with a large spacious building and surrounding grounds. The current roll is 520 pupils with 21 classes and a nursery.  The building itself has 22 classrooms and an all purpose, separate, newly built nursery housing 2 nursery classes. We also have the Sunshine Room which is a nurture space as well as a dance/drama base, kitchen for pupils to use, large main hall with stage and a family room. In conjunction with the other schools in the local area, we have access to large football pitches and wooded, walled garden.

Gracemount’s school badge was designed by the first head teacher to be deliberately different from that of the High School which was built on the same site.  It depicts the Pentland Hills with a small yellow flower in the foreground.  The flower is called the Rue, Herb of Grace. Our school badge represents everything we stand for here at Gracemount. The yellow flower survives in the rocky areas at the base of Scottish hillsides.  It is a hardy wee plant that grows despite the hardships it may face. The petals are star-shaped and face straight up. The green hills behind it are the Pentland Hills which can be seen from the school. The white chain represents the continuous chain of learning which has no beginning or end. 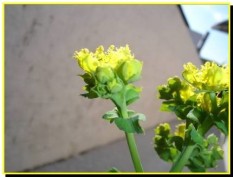